Book Review of A Separate Peace by author, John Knowles.

This book was both interesting and enticing. I continuously read the book and did not cease to enjoy reading it. It is a story about two teenage boys, Gene Forreter and Phineas. These two boys have a constant war between themselves while also maintaining a strong friendship. The novel can be extremely relatable at times, leading to a urge to want to continue. This relatable character is primarily through Gene. He is a student who continually tries his hardest to succeed, but somehow gets overpasses by someone else or has an issue occur to him from his environment. This mix of actions that occur to him make it so the reader feels a level of sympathy for him, while also agreeing with his thought process.

On top of this interesting character development, the story itself is enticing. It shows how easily friends can turn into enemies and how easily friendship can deteriorate. If the correct procedures are taken in a friendship and a large deal of care is placed in the relationship, only then will it be strengthened and reinforced. A war is going on in the story, and the author, John Knowles, effectively shows the reader that although large issues may be erupting in people's environment, their mental perception of the actions around them will have the largest effect. I initially believed that this book would not be interesting whatsoever and that I would have no drive to complete it, but as I progressed through the novel, my desire to continue reading rose. This book should definitely be read because it is a relatable, interesting novel. It goes to show that not all books need to catch your eye instantly, maybe you have to try something new. In the end, you may find that the new action you attempted was a great decision.
at March 21, 2017 No comments:

Here We Are is a collection of essays, thoughts, stories & such from a variety of well known YA authors and public figures.  As with any collection, some items connected with me on a stronger basis than others, but all in all this is a wonderful look at what feminism means to a variety of people and why they think it's important.  I like that this is so personal for so many, it really takes a complex concept and makes it concrete.

This quick read is another look at the life of Jane Goodall, but focused mostly on her work and less on her her personal history (although it is touched on by virtue of necessity).  This is a simplified look for younger students, up through middle school and was fun to read with lots of colorful pictures.

The Human Body Theater is a graphic novel detailing all the body systems, what they are, how they work and why they are important.  it's told by virtue of a skeleton (after all they are the foundation of our body, literally)....this is a tongue in cheek book but with really good information.  I don't know if someone would pick it up randomly, but it is an educational and fun read nonetheless.

I seemed to have grabbed quite a lot of short story collections this time around.  This one was interesting, a variety of realistic fiction from all sorts of teens...after all reality and "real life" means different things to different people.  As with all collections, I have my favorites, but this was a nice collection with a variety of things to enjoy.

I adore Garth Nix and the Old Kingdom novels.  So, I have to say, I was hoping that his titular title novella was a LOT longer; but I appreciated what there was of it.  For the rest of the stories, they cover pretty much every type of story there could be.  Nix grouped them into categories, so if you don't like a particular type of story, you can skip it easily....but if you like to sample things, this is a great way to do so, and with a gifted author.

This is an interesting historical fiction book, taking place in the early 1900s, before WWI.  It's in a diary format, so the reader follows along as Joan decides to run away from home and find work in Baltimore.  She ends up with a Jewish family, and has to learn all about their culture as she also tries to pretend she's 18 (she's 14).   The author based this loosely on the life story of her grandmother, and is a very interesting book, especially if you enjoy historical fiction.

17 year old River is devastated when his girlfriend breaks up with him.  As he is wandering around LA, on foot, he runs across a sign directing him to  group therapy session....he doesn't realize until he is already part of it that it's really aimed at people recovering from drugs and other serious issues.....but he really feels like the group is helping him find his way out of the dark place he's in; so he makes up an addiction to marijuana so that he can keep going.  Of course, things get out of control; but I think readers will enjoy getting to know River and will appreciate his struggle. 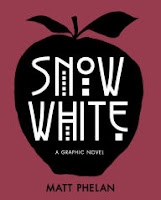 This graphic novel retelling of Snow White is set in depression era America....and is beautifully done.  There are words, but they are used sparingly and only when an image doesn't convey enough...which is not often.  I don't know if this is everyone's cup of tea, but I really loved it.

I was aware of Marcus Samuelsson from various cooking competition shows, but I didn't really know anything about him.  With this biography, I learned quite a bit.  I don't know if he explicitly wrote this for a teen audience, but it seemed like it was aimed in that direction.  He gives his background of growing up in Switzerland after being orphaned in Ethiopia as well as his struggles to make it as a chef in NYC.  A quick and interesting read for anyone who enjoys biographies or chefs.

Out of Darkness is set in 1937 in a small Texas town.  It's based on a real disaster that happened but fictionalized by the author.  Perez shows us the tension between the hispanic, African American and white communities and also delves into other issues that affect the protagonists before and after the disaster.  This story is heartbreaking but powerful. 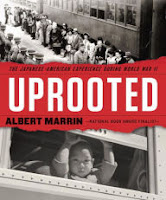 Uprooted is an examination of the Japanese internment camps set up in the US during WWII.  Marrin looks at the racism that caused the government to set up concentration camps, as well as the racism and vitriol that led to WWII.  Marrin also goes a step further, at the conclusion, showing how prejudice and racism still happen by referencing 9/11 and the issues with anti-Muslim violence happening in the US today.  An excellent book for anyone wanting to learn more about this shameful era of American history.
at March 01, 2017 No comments:

To Kill A Mocking Bird: Book Review by Abhiram Singireddy

Plot: Atticus Finch's endeavors to demonstrate the innocence of Tom Robinson, a black man who has been wrongly accused of committing a c...